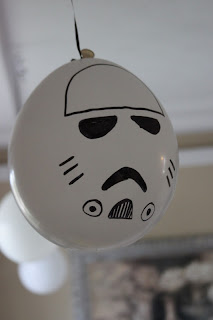 As a woman, I never really though I would know the difference between Jengo Fett and Bulba Fett, or the difference between a battle droid, a clone trooper and a droid decoa. But here I am the mother of two boys and I know way more about Star Wars then I ever wanted to. So a Star Wars Party was not a hard thing for me to whip up.
Here is what we did to make the party AWESOME!

Star Wars Upcycled Invites!
For a few months before the party I had saved these fruit snack boxes. On each side is a star wars image. For the invites I just cut out an image and put the party info on the back side. Instant Invites. 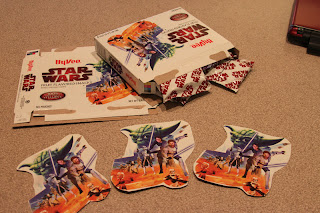 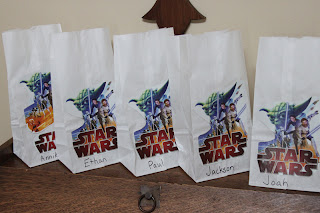 I used the image on the other side on the fruit snack box to decorate some plain white paper lunch sacks I had on hand into star wars lute bags. My son actually helped make these for his friends. When they broke open the pinata their prizes went into these bags.

A week before the party we started creating the Death Star Pinata.﻿ 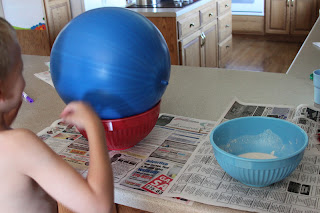 We started with a jumbo punching balloon. 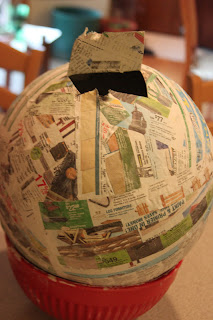 We did two layers of paper mache, I always just use flour and water to make my paste. I let the layers dry for a day in between. Then we added the grey paper streamers using Elmer's glue. 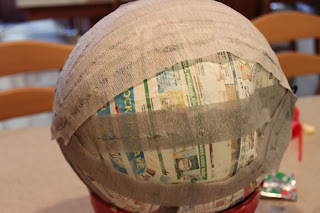 Two layers was plenty, I was worried it would break right away so the first round of hits they used the pool noodle light sabers, then after everyone had a turn I got out a plastic light saber. Everyone still got a turn hitting with that one before I had to add a few cuts with a box cutter to weaken it. 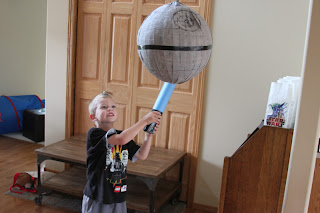 They also didn't just destroy the Death Star.. They had to find it first. For their final Jedi Training mission, we sent them on a note scavenger hunt. We had Yoda write the clues and he told them to look different places in the house to find more notes that would lead them closer to the secrete location of the Death Star. Good thing dad came up with the perfect hiding place. In the dryer!

Large Storm Trooper Balloon!
That is no fancy expensive party balloon, it is actually a white tall kitchen trash bag decorated with a sharpie! 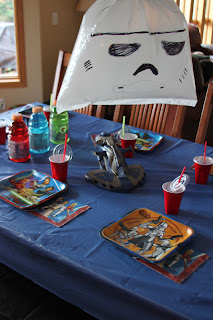 We hung it above the chandelier above the table. It made a great decoration.
Also if you notice in the photo we had Vader-aid to drink. 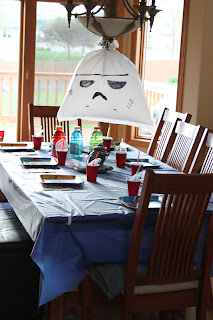 Pool Noodle Light Sabers.
Just cut in half, add duct tape and electrical tape.
We got everything we needed at the dollar store. These were so awesome and did no damage to anything in our house. We also did not star the party off with he light sabers, they had to do the laser beam challenge and learn to use the force first. 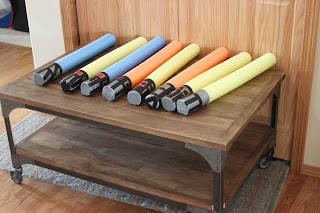 Helpful Party Tip:
The phrase, "Patience my young padawan." comes in handy when they ask tons of questions about what they get to do and when.
Also make sure they know true Jedi listen to their master. (aka you)
Jedi also must learn self control, good to remind them of this before you give light sabers to a bunch of young kids. 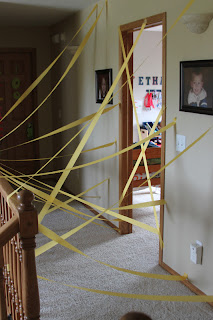 Just like the laser doors that trapped Obi Wan in Episode I keeping him from helping Quigon in the battle against Darth Maul! These lasers you must try to move through without touching or knocking down. 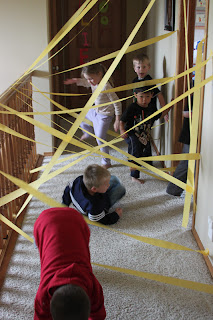 Using the Force
Remember that commercial where the boy in the Vader costume uses the force to start a car, when really the parents hit the start button on their key chain? Well we did the same thing, but with the fire place. Our fire place control is on the other side of the room so when I was teaching the kids how to focus their force all on the fire place to start the fire. My husband out of site was able to hit the switch to turn on the fireplace. We had a few surprised faces, that is for sure. 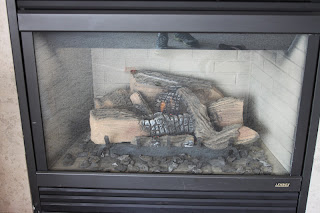 Sneak by the Storm Troopers!﻿

A storm trooper squadron had taken over the living room. They were white balloons I had used black sharpie to draw a storm trooper minimalism face on. I then tied black string on them and hung them with tape from the ceiling. 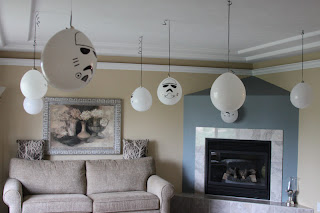 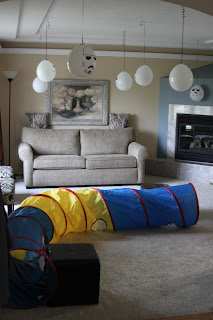 Jedi's in training at the party had to crawl through the ventilation shaft (aka crawling tunnel). 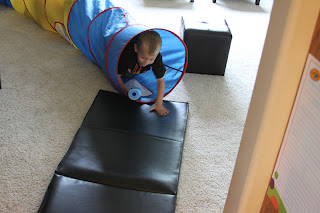 Then do a quick Jedi somersault to keep the storm troopers from seeing them. 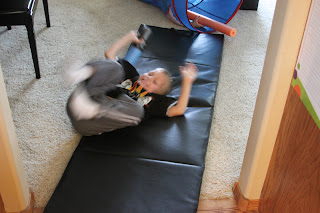 At the end of the party, the Jedi's who had graduated from Padawon Learners to Master Jedi got to go and destroy the storm trooper balloon army by whacking them with their light sabers. 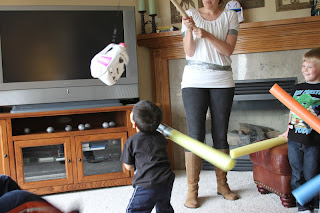 They also had storm trooper pinata training. In order to destroy the death star pinata later they got to practice their aim on a storm trooper head made from a milk jug. I tied it to a string and a stick so I could safely stay out of the way and swing it closer or father from the Jedi in training. 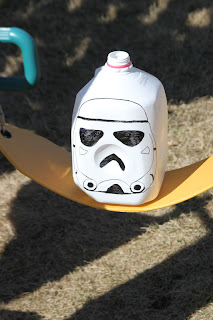 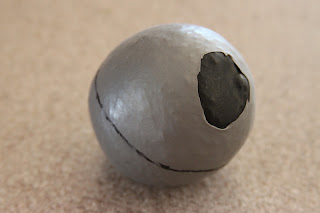 Each child got to make a death star ball out of balloons and rice. They are super simple and took only a minute or so for each kid. See the simple how-to here. They made them right when they came one at a time and the other kids played with the star wars guys while they waited for others to finish. 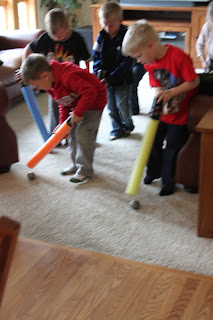 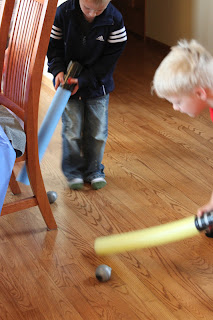 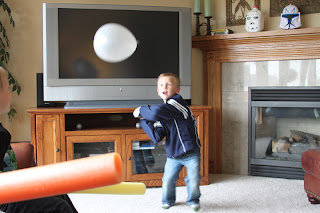 We also did a bit of  light saber base ball. I batted the balloon toward them and they had to hit it with their light sabers. Everything is soft so no chance to destroy or break anything. 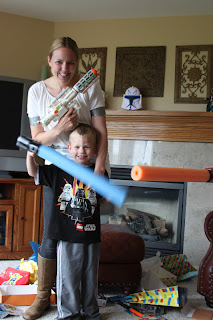 I also did my best to dress up like Padame, but I think I looked more like she would have looked if she had survived childbirth of twins. HA! It was still fun, but the 5 year olds didn't really get it. "Why do you have duct tape on your arms??" Ha! Oh well!
Posted by MusicalMommy at 7:54 AM 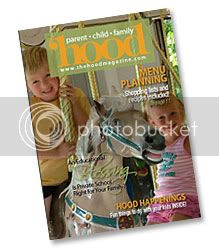 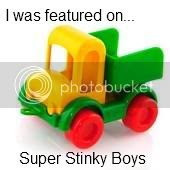 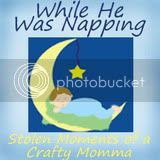