I have flown to Korea and back! Long flight yes, but I only had to do it once with a child, and lucky for me that child was only 9 months old,  and super lucky for us, he pretty much slept most of the time.  But Malaysia is even farther than Korea! And that is where my daughter's buddy Linus (yes I know adorable name, and he is just as adorable to match it.) is headed this week with his dad.

How does one keep a 6 year old busy while in the air for 20 plus hours total? Well I heard this idea about using envelopes from a friend of mine and decided that that is what we would do for our friend Linus as a travel gift.

The idea is simple. Get a bunch of envelopes and fill them with different activities to keep him busy on his trip. The catch is... that our buddy Linus will have to wait two hours before he gets to open the next envelope.  So every two hours he will have a new surprise or activity waiting for him that he has not seen before. He has no idea what is in each envelope.  We have 10 envelopes ready for him to take on his trip. 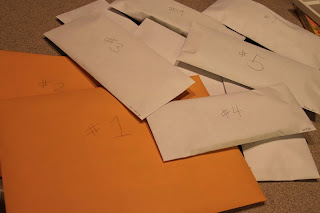 Here is what we decided to put in them. 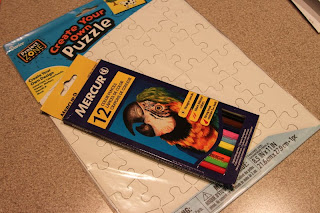 Envelope #1
Create your own puzzle and colored pencils. We also included a Ziploc bag to keep the pieces in when he is done. Instructions were to make your own puzzle! Draw anything you want, but the only rule is that there has to be color on every piece of the puzzle before you take it apart. Otherwise it would end up being a pretty tricky puzzle. 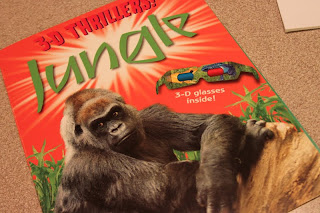 Envelope #2.
What 6 year old boy doesn't like 3-D! We found this soft cover book at the dollar store that came with 3d classes. It is not super thick but it is pretty cool. When you put the glasses on, the monkeys practically jump off the page. There is also great things to learn about jungles in different parts of the world and the animals and plants that live in the different countries. Envelope #3
Go Fish Card Game. Thought I would put this towards the front of the trip so that he can play it again if he gets bored later. Card games are great to keep kids busy on plane rides. 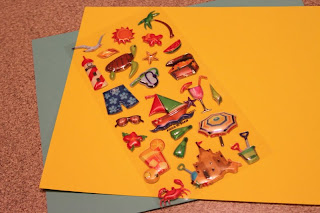 Envelope #4
The Sticker Challenge
I got this sticker set in a scrapbooking section on clearance. The challenge is to use all the stickers and the colored pencils to make a picture scene. So for example he will probably have to draw legs and a body coming out of the swim trunks and put the sunglasses on the head he draws for that guy. I am hoping it will take some thinking to be able to use them all in a way that fits together. 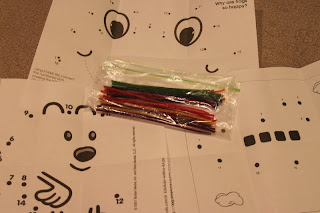 Envelope #5
Bendaroo / Wikki Stix Dot to dot
I am sure you have heard of Bendaroo's, wax covered strings that you can bend and mold into fun things. Well they have been around for a while sold by another educational company that called them Wikki Stix. The Wikki Stix website has a few great activities you can do with their product and one includes free printable dot to dot pictures that you don't do with a pencil or marker, but you do using your Wikki Stix or Bendaroos. You lightly put them down and they will stick to the paper. It is great fun, I tried it myself a bit on the frog picture. They also stick to each other, and they are not messy, so I tossed some in a baggy for him and printed out a few dot to dots. One from the wikki stix website, and a couple others, Wubbsy and an airplane, I found by just searching dot to dot printables. I am sure the things he thinks to make out of these won't stop with the dot to dot pictures either. They are great fun. 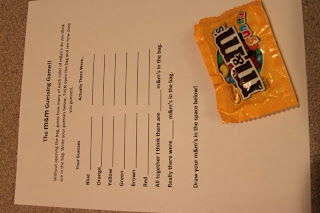 Envelope #6
The m&m Guessing Game
Ok really I just made it up but I think it is a great activity, just might pass it on to a teacher friend or two. I went with the mini bag of peanut m&m's because we don't want little boys to be hopped up on chocolate and stuck on an airplane. I am sure 8 peanut m&m's won't get him too hyped up. Peanuts have protein that is good right?
Anyway... He has to guess how many m&m's are in the bag. (I felt the bag and know the answer is 8) The printed sheet says to guess how many of each color is in the bag and write his guesses down. Then when he opens it, he has to count the real number of each color and write it down to see how close he was at guessing. He also has to draw a picture of his m&m's at the bottom with his colored pencils. So he will have a cute picture of colored little ovals at the bottom I am hoping anyway. :) Keep him busy, do a little math, and eat a little snack. 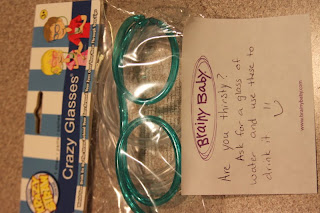 Envelope #7
I told him on the envelope he is allowed to open this one right after finishing #6 if he wants to. Because he might be thirsty after eating those m&m's. Linus has told me that I am pretty goofy and silly before. Ah this is true, this is true, so I had to come though and let the poor boy who is trapped on an airplane for 20 hours do something silly. So I grabbed these glasses that are actually a drinking straw. I am sure his dad will think I am totally nuts. And to be honest, Linus may not even want to try them especially if people are looking, because his is not one to draw attention to himself, but I hope he gets a kick out of the idea and long hours on an airplane may drive people to dare to do new and different things. lol 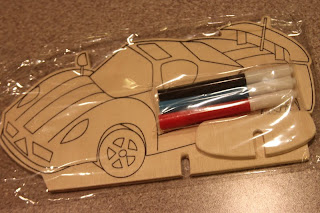 Envelope #8
Color your own wooden race car cutout with stand. It came with the little markers too. It was $1 at Michael's crafts. But flat, light and didn't take up much space, so I went for it. Has to be more fun than just coloring a printed coloring page right? 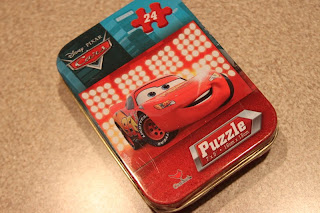 Envelope #9
Small puzzle in a little tin. I know he enjoys puzzles, I have seen him work on them before. I wished this one had more pieces. It came from the dollar store as well. There were others in the same size tin that had more pieces but they were for girls. I am thinking by this time that when he opens this envelope and does this puzzle it will remind him of the first puzzle and he may want to do that one again as well. 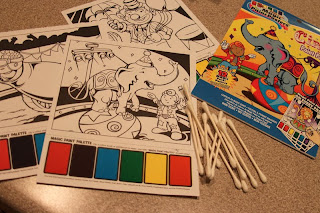 Envelope #10
Alright I may have gone completely loopy but I put in three paint with water pages. We tried them  out ourselves and they were a bit messy. I put a warning on the envelope for dad to hold the authority as to if he does them or not. Linus is good at listening to dad, and that is what my instructions say too. And don't worry too much this dad is totally craft capable. He actually owns a tandy leather and jewlry beading store. If this project is not for the plane, he can save them for when he gets there. 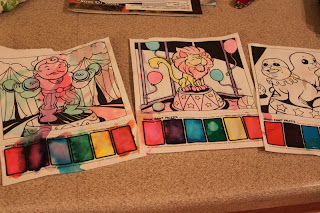 The one tip if you do them is that you will want something under the paint part. The paints leaked through the paper and stained my counter a bit. I had to get out the magic eraser to clean it up. But neat idea with the paint on the page. Then you just need cotton swabs and a little water to paint. This little book of pictures with paint we picked up at Michale's craft store as well. 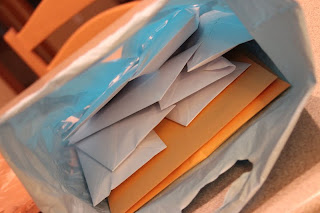 Tying it all together
Well I wished I had thought of it sooner... but if I was to do this again on the inside flap of each envelope I would put one word. They would have to write each word in order on the big envelope to discover a secret message that is 10 words long. Maybe I will just write it on the outside flap of each one instead.
How about:
Have fun in Malaysia, see you when you get back!
Linking up here: 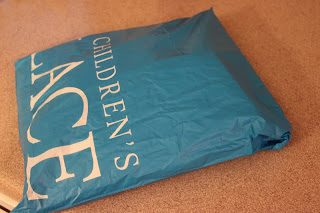