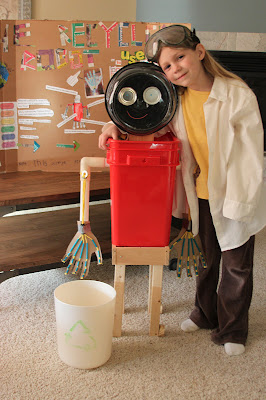 Around Christmas time my daughter started brainstorming about what she wanted to do for the science fair this year. Last year at age 5 she said she wanted to build a robot. Well I talked her into an easier project, but this year talking her out of the idea of a robot didn't work so well.
She was bound and determined to build a robot. Again I told her that was a project better left for when she was older, that she would need too much help from us and that she wouldn't be able to do it on her own.
Early January, two weeks before the registration even came out for the March Science fair... she announced she was going to be busy in the basement working on her Science Project. She was going to build a robot. I again told her that it is hard to build a robot and that she could go ahead and try but mom and dad were not going to help.
She could be heard working hard in the basement for the next 45 minutes. She came upstairs with a wooden base and three legs attached to it. I still to this day do not know how she figured out how to tack the legs from two sides, nor do i know how she was able to do so without clamps, yet she did, and proved to us that she was serious about this robot building thing. 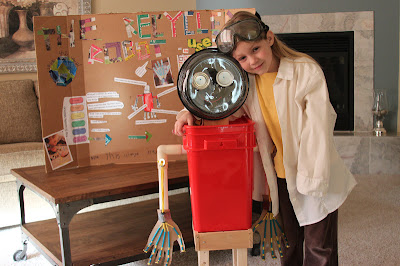 So somewhat backwards in the process, we had to help guide her toward the scientific method and how she needed to use her project to answer a question.
The question she came up with was.

(State the Problem)
What will inventors do in the future if we run out of new materials?

(Gather Information)
To gather information she did some research on her favorite inventor Thomas Edison and what sorts of materials he used for his inventions.  She discovered that he many times used old things to make new things. She also found a book about robots from the library where she also learned that many times old parts had to be used to make new robots. She researched robots and the jobs they do. She also had do do research on the human hand and how to make a simple robotic hand that opens and closes.
(Form a Hypothesis)
She then formed her hypothesis of:
I think I can build a robot using only used materials.
(Experiment)
Thus the Recycled Robot was born...
(Insert weird crazy Dr. Frankenstein laugh here.) 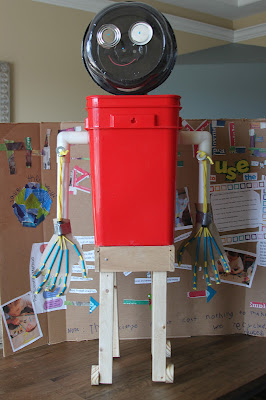 Her conclusion was that you have to use a mix of old and new materials in order to build a robot, because she was unable to reused old glue, or old tape.
More about her process.

She wanted the robot to perform a task after talking to a family friend of mine and discovering that a robot is a machine that performs a job.
She had to keep things simple and used simple machines like a pulley and a lever instead of electronic parts and pieces in order to keep the project on a level she was capable of completing at the age of 6 and so that she could still try to stay within her parameters of building it out of only used materials. 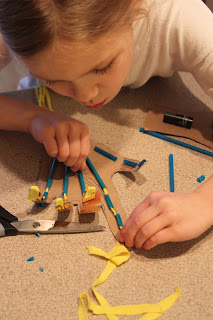 With some supervision and help, because I was not about ready to let my 6 year old search the Internet by herself, she did some research on robotic hands and how they open and close. She then found a few examples of simple robot hands online and used the ideas to make her robot hands function the way she wanted them to. 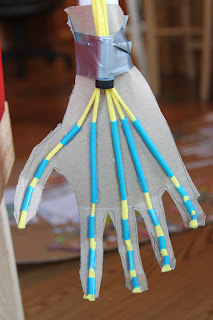 The hands she ended up with are a bit different than the ones she found so you could tell she used the ideas she saw and made them her own.
She has had some experience using a low temp glue gun before so she went to town. 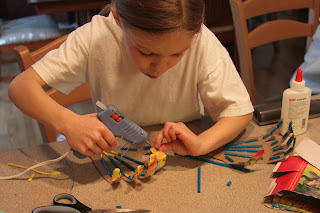 Any power tools used in the project she did use, but only under strict supervision and guidance from her father, or myself. She would tell us what she was trying to do and how she wanted to do it. We would suggest ways that it might make it work better or stronger and helped line up the holes before she drilled them. 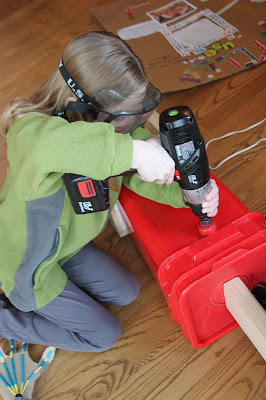 We do have a lot of junk in the basement, the kids have their own tool bench and we keep it well stocked with scrap wood from building projects we have done. They have their own set of simple tools, but are not allowed to use power tools without an adult. She was able to find what she needed at our house. 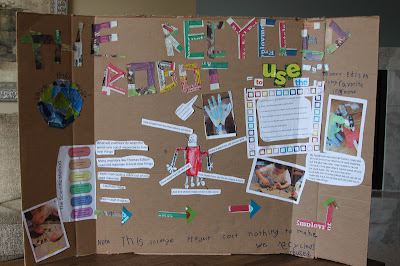 Even the display, she wanted to keep with the recycling theme so she choose to use cardboard from a box for the back and magazines and newspaper to decorate it.
The robot construction was worked on various times but took a total of about 4 days worth of work, for 30 min to an hour each time.
The display and work took around 3 hours to complete total. It takes a lot of work to type or write all of your findings up when you are only 6.
In the end I was very glad she started super early on her project and could work on it when she was in the mood to do so.
Here is her final recycled robot and how he works to help people have fun while they recycle.

Click here for an update on how she did at the science fair.
Linking up here:

Posted by MusicalMommy at 4:18 PM